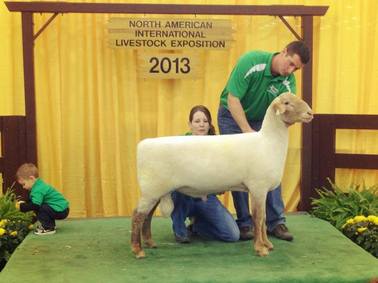 Uptown 1306 is a "Boots" son out of Uptown 805, one of our most prominent females who is also the mother to Red Lightning.  His first lamb crop will arrive in 2014! 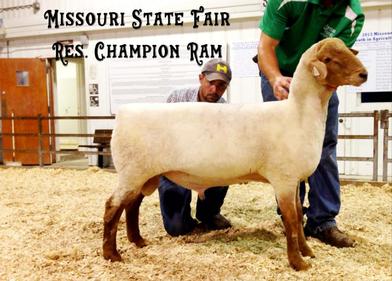 This exciting 2013 ram lamb is sired by Red Lightning and out of Uptown 1002 (by JethRRo).  He won the ram lamb class at Missouri State Fair and was Reserve Champion behind the yearling.  He shows exciting hind saddle length and was used extensively for the 2014 lamb crop! 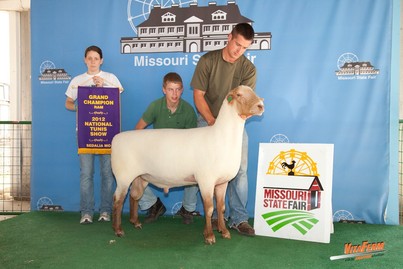 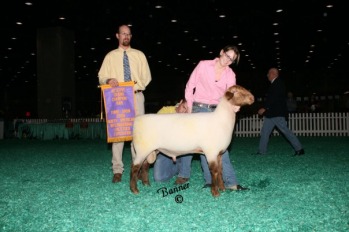 Red is the most exciting ram we have raised to date.  As a ram lamb in 2009 he won Missouri State Fair and was Reserve at NAILE.

We are looking forward to this ram being able to add a lot to the flock.  He is a big, long buck that percentages out better than any of the rams we have seen.  As you can see in his picture, he carries mass amounts of bone, excellent breed type (including the white crown) and even better structure!

The most exciting part about him though is what he is doing genetically for our flock.  His mother is our most consistent producing female, the 2007 Reserve National Champion Ewe, "Bottle Baby".  She goes back to Mayes top bloodlines.  His father won his class at NAILE as a ram lamb and was not shown as a yearling due to an injury sustained on our farm.  However, his father is "RedMan", John and Irene Brun's National Champion Ram.

Red's offspring have already made their impact here at the farm.  He has already produced numerous champions and class winners as well extremely promising stud females.

Update -- Late winter 2012 we were very sorry to have to announce that Red has passed.  It appears to have been a fight with another ram and it our breaks our hearts.  Luckily he has blessed us with an oustanding lamb crop in 2012 to carry on his legacy. 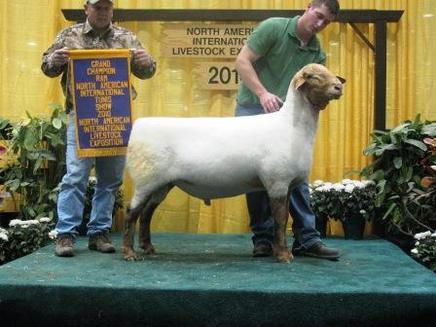 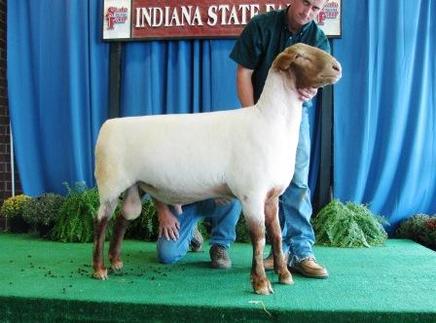 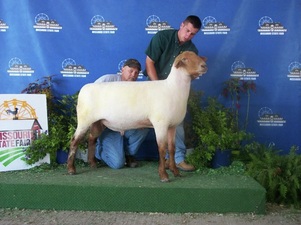 We purchased "Big Rig" from Tammie Serafin from Triple T Tunis in Oregon as a ram lamb in 2009.  We did not take possession until the late fall of 2009,so 2011 was his first lamb crop on the farm.  This ram is sired by the famous "MRR. Big", two time NAILE Champion Ram and one of the most imporessive studs out there.  His mother goes back to a "Redman" female.

We were pleased Tammie allowed us to purchase this ram and can't wait to see his lambs.  This ram has got the size, exceptional feet and leg structure, and an exceptional front end.   He won Missouri State Fair for us this year and stood 2nd behind Red Label at the National Tunis Show and NAILE, where he was Reserve Champion behind Red Label. 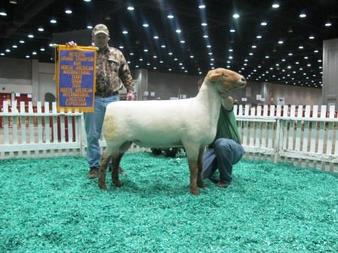 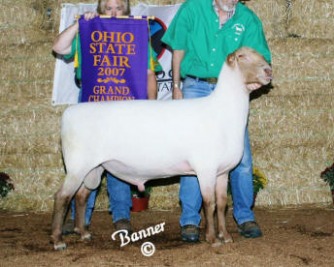 The hindsaddle on this ram is un-matched!  Watch for his lambs!

JethRRO has sired irreplaceable females for us including "Baby Doll" and Uptown 805, mother of Red Lightning.  He also sired the 2011 Reserve National Champion Ram "Aaron" for Troy Staples and the National Champion Pair of Ram Lambs for Troy.
Tunis sheep hampshire sheep